I will always argue that desserts taste better in bar form. Whether it’s brownies, blondies, or snickerdoodle bars, I just feel like everything bakes the best in an 8×8 pan! Desserts always taste better on Bachelor night as well. Baking on Bachelor night is one of my favorite ways to unwind. My fiance and I started watching The Bachelor together several seasons ago as a joke but then, like the rest of America, we got hooked. Now we look forward to Bachelor night every week and baking something sweet or making a cheeseboard while watching.

These snickerdoodle bars are super fluffy and moist. They also aren’t overly sweet- but they can also be made with additional sugar!

The greek yogurt in these bars acts as a 1:1 butter substitute, but it also helps activate the baking soda while in the oven, making the final product fluffy and light.

This has definitely become one of my favorite baking go-to’s. It’s easy to put together and it turns out delicious every single time. Give it a try and let me know what you think! 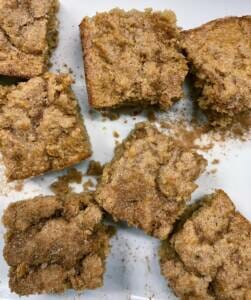 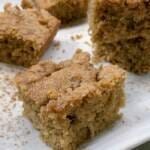 Fluffy, moist and just the right about of sweet- it'll be impossible to just eat one!
Prep Time20 mins
Cook Time23 mins
Servings: 16